FROM BATH TO BOTANY BAY


FROM BATH TO BOTANY BAY

The very existence of a convict ancestor was unknown to my family until the 1980s. I knew my great grandmother Lucy Wickham was born on the goldfields of Beechworth and probably in a tent, as my mother would scornfully add, but certainly not that her father had been a convict! Like so many Australian families, this was a revelation. My grandmother must have known, but took the dreadful truth to the grave. She had said the family came from a place called 'High Wickham'…

In fact, Lewis Wickham was born in Bath, Somerset, and baptised at the Church of Swithin in April 1819. The Wickhams had long resided in the Parish of Walcot, but their tenuous survival was far removed from the giddy round of parties Jane Austen describes. The son of a labourer and grandson of a butcher, young Lewis, plasterer’s boy, glimpsed elegant society within the walls of the Georgian townhouses of Bath.  He knew the promenades and alleys like the back of his hand, and may have picked a pocket or two! [1] [2] [3]


Lewis Wickham was 14 years old when first convicted for stealing cheese and soap, sentenced to two weeks and whipped, 2 April 1834 [4] [5]. On 4 October 1834, 6 months later, and only weeks after his mother's death, Lewis Wickham now 15 years old, stole a handkerchief with co-conspirator, Henry Pittard. The Bath Chronicle and Weekly Gazette described the boys as, "notorious juvenile thieves".


Lewis Wickham, convicted as above, was sentenced to 14 years and transportation to New South Wales.  Henry, 12 months and whipped; later transported to Van Diemen's Land in 1840.The plight of Lewis Wickham's tragic family revealed by their many baptism, burial and criminal records begs the question, was transportation preferable to the life he would have led at home? [7] [8]

Generations of the Wickham family continued to reside in the same streets of Bath  for over 100 years.  As late as 1900, Milk Street, Lewis’ home, was described as “one of the poorest parts of Bath, regularly flooded and the haven for Bath’s unfortunates”. Lewis, a city urchin to his core, unable to write, could not have imagined the life he was to lead, or have been more ill prepared [9] [10].

The Wickham name was well known to authorities. Lewis’ Uncle Henry, convicted for picking pockets, 1826, elder brother William, for stealing boots, 1837; both transported beyond the seas to NSW. I have no evidence they were ever reunited in the colony.  [11] [12]
Upon their father's death in 1835, Wickham's orphaned younger siblings were removed to the Bath workhouse, where the toddler Benjamin, died 3 months later. Eliza, convicted for proffering a counterfeit coin, died there as an adult. Robert learned the trade of a shoemaker and did not forget his brother. 46 years after Lewis' transportation, his son Lewis Benjamin Wickham was born in 1881 in Milk Street. [13] [14] [15]
Lewis Wickham was received to the Prison hulk Justitia, moored at Woolwich on the Thames, 3 November 1834, from Ilchester Prison with fellow youths tried at Taunton.  4 months later, on 3 March 1835, John Niblett and Lewis Wickham sailed from London on The Westmoreland, one of 14 convict ships to arrive in Port Jackson that year.  The voyage lasted 134 days, arriving Sydney, 15 July 1835. Wickham was one of 220 male convicts, 2 of whom died on the voyage and one of 28,000 convicts in the colony of NSW [16] [17] [18].

The Justitia's surgeon’s report describes Lewis Wickham as healthy and of good behaviour; as per each entry for the page [19].

Lewis’ youthful appearance is well described. On arrival in Sydney, he was 4 foot 9 inches. The prisoner indent noted his hair and eyes were brown, complexion ‘ruddy and a little pockpitted’.  Scars on the left temple, back of right thumb, forefinger of  right hand and knuckle of forefinger of left hand; 4 dots inside the left wrist and a blue mark on the back of the middle finger [20].

Wickham was assigned to Eliza Broughton of Appin prior to the 1837 muster.  He was granted a Ticket of Leave at Yass, where the Broughtons owned property on 23 August 1841 indicating he had served 6 years of his sentence without incident. Tickets of leave could be issued for informing on bushrangers and there were many incidences of bushranging in Yass. Mrs Broughton’s property was attacked in 1838 but I have no knowledge of any involvement on his part [21] [22] [23]. For more information on the Broughton family, go here.

Exposed to a life of crime from an early age and incarcerated with criminals, the probability of reoffending was real. At Yass, 6 August 1844 Wickham was charged for being in receipt of stolen property. Due to overcrowding of  Yass gaol, Wickham was held in Berrima gaol, probably walking the 191.5 km distance.  A gaol entrance description reveals he had grown two inches but lost 2 teeth. 4 Months later he was found not guilty and discharged; and 2 years later, in 1846,  granted a Ticket of Leave Passport allowing  him to remain in the Murrumbidgee in the service of J A Broughton. For more information go here. In 1850, almost 16 years after sentencing, Wickham received his Certificate of Freedom which gave his calling as a labourer, the only clue to his servitude. Respectability, valuable land holdings, fortune and status were never his lot [24] [25] [26].

Many emancipated convicts and Irish immigrants were drawn to Tumut including, Mary Fall who had arrived in 1841 as a 9 year old, with her father, a Bounty Immigrant from County Clare. Her mother died on the voyage. Wickham, in 1851, the year gold was discovered in Victoria, was granted a town lot of half an acre in Tumut valued at 4 pounds. For information on Tumut go here. ink is external)

Mary and Wickham married in Tumut in 1852; he was 33 and she was 20. There were widespread and deadly floods that year. The lure of gold was irresistible. The Wickhams and thousands like them, deserted Tumut for the Victorian goldfields where my great grandmother, Lucy their eldest child, named for Lewis' mother, was born in Beechworth in 1855. Lucy's birth announcement was the only time Wickham's name was published as Mr Lewis Wickham.  I feel this one entry is a somewhat poignant gesture, revealing Wickham proud to proclaim himself a father [27] [28] [29] [30]. 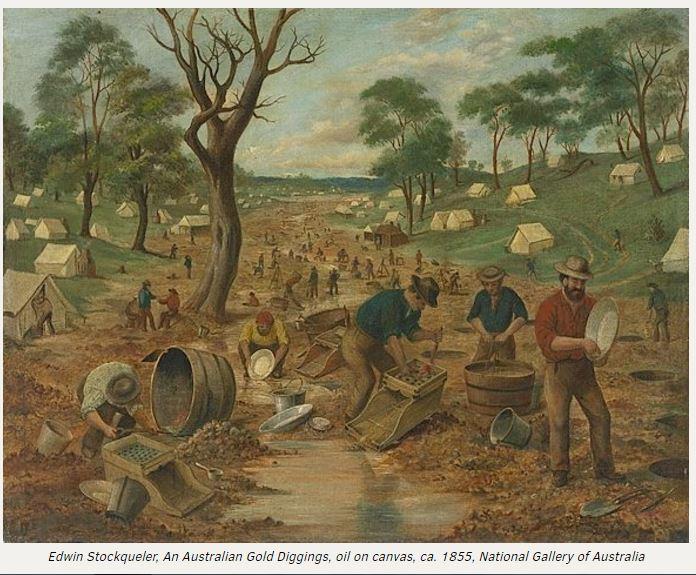 For more information on gold miners and mining during the period go here.
Daughter Catherine's birth registration and a miner's right for the same year, 1857, are the last known evidence of the life of Lewis Wickham. He was 38 years old, his mother's age at death. 7 years; the sum total of his life as a free man. Despite all, transportation gave Lewis Wickham a fighting chance denied him in Bath. The tragedy endured by his family for so long, back home, supports this opinion. We will never know who penned the unclaimed letter sent to Lewis Wickham in Sydney, perhaps by his brother Robert. By chance, but with fondness and pride, I share my great great grandfather’s Christian name (albeit the feminine version), and trust that dear Grannie would not be too mortified that his story is finally told.
Shh! Don’t let the neighbours hear you talking! [31] [32] [33]

List of references.
Posted by Louise Parker at 21:15 4 comments: